“Isomorphic” word is defined as having the same appearance or form. But in web development aspect, isomorphism is a hybrid approach for web applications.

Earlier, web applications were available with server-side rendering. Users request a page and the server returns the desired page. These were called SPA-Single Page Applications which were used for a long time.

Basically, they retrieve information from the server with API calls and then fetch pages in client-side.

SPAs were used for a significant time but it had some disadvantages.

1.Performance: It was noticed that in most cases, server-side rendering was faster than client-side rendering.
Also, initial load time can be a big headache while loading JavaScript files and making an API request to retrieve information. 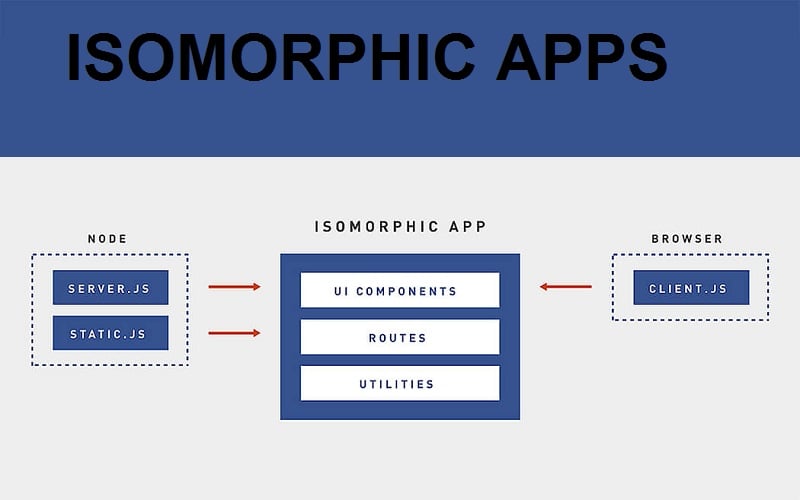 1.Better performance: Pages are rendered at a faster speed.

3.The flexibility of client-side: Better web apps can be developed with the balance of client and server-side.

4.Easy Maintenance: Since the same code can be shared by both the server and the client, so there is no need to write the same logic twice. There is less code and it is easier to maintain the code.

5.Old Device Support: For the retrieved pages, it is not a problem to support old devices. Though, with SPA frameworks/libraries it was a problem.

6. Poor Connections: With SPA it is noticed that users have to wait for minutes for all the JavaScript to load before they could even see the page.

But with isomorphic rendering, it is possible to meet this threshold even in extreme cases.

Using isomorphism can overcome this poor connections problem and can let you use web applications easier and faster.

2.  Server-side and client-side are different environments with different dynamics and using the same code can be problematic in different cases.

1. React:  In React framework, the same components can be used in both server-side and client-side while building the modern app.

It includes a set of technologies for developing reactive applications, a build tool, a set of packages from the Node.js and JavaScript community.

3. Angular.js: With Angular, rendering is available for both server-side and client-side to provide better optimization and performance for search engines.

4. Render: Render allows you to run your Backbone.js apps flawlessly on both sides- the client and the server. It also allows your web server to present fully-formed HTML pages to the deep link of your app while maintaining that traditional Backbone.js client-side MVC app.

5.Derby.js: Full-stack framework- Derby.js is used for building modern web applications. It lets you render the same templates to HTML in the browser or on the server. Which means faster page loads, search engine support and retrieving emails from the same templates.

6.Ezel Node.js: Ezel is built on popular libraries like Backbone, Express, and Browserify. It is used to build and maintain Backbone apps that run in the browser and on the server using Node.js.

8. Este: Este is considered as a starter kit for full-fledged universal “React” apps.

9. Next.js: It is defined as a small framework used for universal JavaScript web apps, developed on the top of React, Babel, Web pack.

10. Fluxible: It is used to develop isomorphic Flux applications.

1.Asana:  It is a task management tool which uses its own framework- “Luna” for isomorphism.

2.Airbnb: Airbnb is known to have used a self-developed library named -Rendr.

3.Drupal 8: It is basically an open source CMS which started to use the concept of isomorphism with its version 8.

4. Telescope: It is a platform for app building which uses  React and Meteor Javascript framework for isomorphism.

5.Ameblo: It is a famous Japanese blog company that stated that their, load times, speed, bounce rates, page views were improved with isomorphism feature.

6.Coursera: By using React and Flux, Coursera was able to provide 4x speed.

Web technologies are updating every day, isomorphism is another feature of Javascript which let you match the recent world needs.

In case, you need web products developed with such modern approach then, Orion eSolutions can be of great help to you!